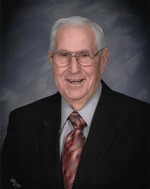 A visitation will be held on Saturday, March 7, 2020 from 9:30 AM until service time at The Cathedral of St. Francis de Sales. A Mass of Christian Burial will begin at 11:00 AM at the church with burial following at St. Francis de Sales Cemetery #1.

Scotty was a World War II veteran, a graduate of Sam Houston State University with a degree in Agriculture, and a parishioner of St. Francis de Sales Cathedral. He was actively involved in the Knights of Columbus, the St. Joseph Italian Society and numerous Mardi Gras organizations.

The family would like to thank the staff and nurses of Haydel Hospice as well as his many caregivers.

In lieu of flowers memorial donations may be made to The Society of St. Joseph, Husband of Mary; 500 Goode St. Houma, LA 70360.