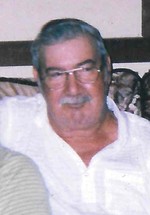 A visitation will be held on Friday, October 23, 2020 from 5:00 PM until service time at Ordoyne Funeral Home. A Funeral Service will begin at 7:00 PM at the funeral home.

He enjoyed fishing, cooking outdoors and spending time with his family.

The family would like to thank the staff of Saint Joseph Hospice for their care and compassion.