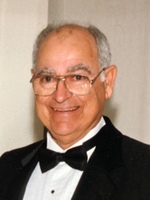 A visitation will be held on Thursday, June 4, 2020 from 11:00 AM until 1:45 PM at Ordoyne Funeral Home. A Mass of Christian Burial will be held at 2:00 PM at St. Genevieve Catholic Church. Burial will follow at Saint Joseph Cemetery.

The family would like to thank the staff of Audubon Health and Rehab, Regional Internal Medical Associates and St. Catherine's Hospice for their care.