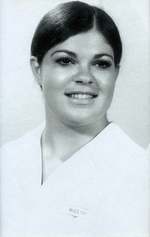 A visitation will be held on Saturday, June 13, 2020 from 10:00 AM until service time at Ordoyne Funeral Home. A Funeral Service will begin at 11:00 AM at the funeral home with burial following at St. Anne Cemetery in Napoleonville.

She is preceded in death by her parents, Ray Armand Toups, Sr. and Willa Mae "Billie" Simmon Toups.