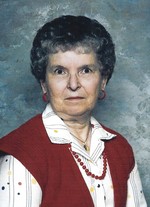 Eola was a past president of the American Legion Auxiliary Unit 513, VFW Auxiliary 5097, Thibodaux Regional Medical Center Auxiliary. She was a member of the Louisiana Federation of Business and Professional Women and was awarded Woman of the Year in 1988. She was also a member of Woodmen of the World Auxiliary. She worked for Wal-Mart for over 20 years.

The family would like to thank the staff of Audubon Health and Rehab and Dr. Jody Plaisance for their exceptional care and compassion.