To share your memory on the wall of Charles Arrington, sign in using one of the following options:

Provide comfort for the family by sending flowers or planting a tree in memory of Charles Arrington.

Provide comfort for the family of Charles Arrington with a meaningful gesture of sympathy.

He is survived by his three children, daughter, Cheryl Dodson of Port Angeles, Washington, son, Paul Arrington, Sr and his wife, Joanne of Maupin, Oregon, daughter, Marilyn Gonzalez and her husband, Gilbert Sr. of Thibodaux, Louisiana; and half-sister, Betty Maxey of Paducah, Kentucky. He was Grandpa Chuck to his nine loving grandchildren, 11 great grandchildren and five great-great grandchildren. His grandchildren are Lony Power, Jodi Ramey (Harry), Charlie Anderson (Roxie), Paul Arrington, Jr. (Sarah), Libra Bednarski (Heath), Vanessa Bassett (Andy), Almarie Cook, Gilbert Gonzalez, Jr. (Taylor) and Aaron Gonzalez (fiancé, Molly). He also gained a Thibodaux grandson, Ricardo Hernandez. He was a much-loved uncle to many nieces and nephews and great nieces and nephews. He was preceded in death by his parents, his beloved wife of 68 years, Louise, and his extended family by marriage, Louise’s parents and her siblings and spouses. Also preceding him in death was great granddaughter, Alexis and great-great granddaughter, Bella.

Charles spent his young life as a farm-boy in Kentucky and Missouri. He set out to see the world at a very young age and worked as a ranch-hand and hotel porter in places like New Mexico and Colorado and wherever his adventures took him. After Pearl Harbor, like many young men of that era, he joined the US Navy to serve his country during World War II. He was stationed in Bremerton, Washington and met the love of his life, Louise Morrison, who was a nurse at Harborview Hospital in Seattle. He was shipped out to the South Pacific and served as a gunner’s mate on PT 126. After enemy action resulting in injury to Charles and his shipmates, he was sent back to Bremerton Naval Hospital. He never forgot Louise and contacted her upon his recovery and the ‘rest was history’ as he liked to say.

Louise and Charles were married on April 8, 1944 and spent 68 wonderful years together. He was welcomed by Louise’s family in Alaska and he finally had the big family he had always wanted. He spent 47 years as a commercial salmon fisherman in Alaska and Washington. Hard work was nothing new to him and he loved all that was good about his fishing years; the beauty of the open ocean, the excitement of a big catch and the satisfaction of being the captain of his own ship. Generations of fisherman in SE Alaska remember the strong deep voice of Captain Chuck on the marine radio.

He was also a man of God. He loved his precious wife with all his heart and cherished his children and grandchildren. His sweet, kind nature touched all of his loved ones and all who met him. He was a humble person who gave his best to all and lived his life to the end in kindness, humility and gratitude for all of God’s blessings. To the end, he greeted each morning rain or shine, with ‘Looks like a beautiful day out there.’ Thank you, Dad, Grandpa, Uncle, and Captain for showing us what goodness truly is and for seeing the beauty of each day.

Remembrances in honor of Charles 'Chuck' Arrington can be sent to the National WWII Museum, 945 Magazine St., New Orleans, LA 70130.

To send flowers to the family or plant a tree in memory of Charles Lee Arrington, please visit our Heartfelt Sympathies Store.
Read Less

Receive notifications about information and event scheduling for Charles 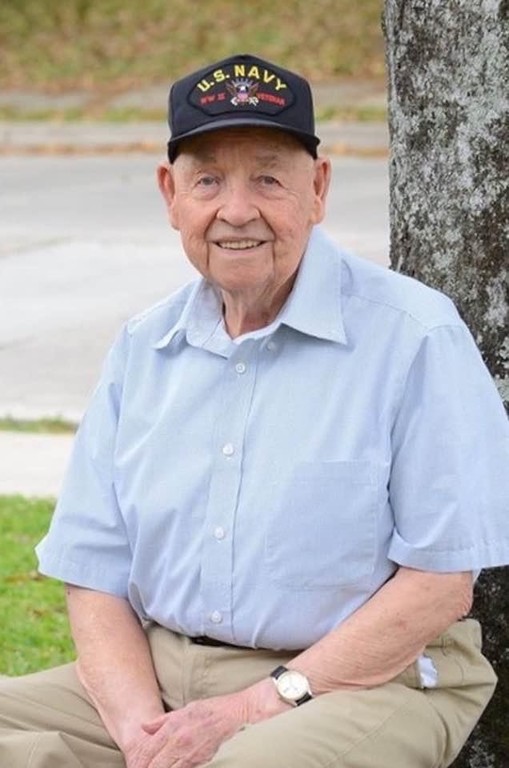 We encourage you to share any memorable photos or stories about Charles. All tributes placed on and purchased through this memorial website will remain on in perpetuity for generations.

Carly Clark and From the Ezema Family sent flowers to the family of Charles Lee Arrington.
Show you care by sending flowers
Hand delivered by a local florist

Carly Clark and From the Ezema Family sent flowers to the family of Charles Lee Arrington.
Show you care by sending flowers
Hand delivered by a local florist
CC

May you be comforted by the outpouring of love surrounding you.

From the Ezema Family

Sending our love and support to you! We have lost a great great man, whose life is cherished and will be honored. Grandpa will be tremendously missed.

From the Ezema Family purchased flowers and planted a memorial tree for the family of Charles Arrington.
Order Now | Show All
Comment | Share Posted Sep 23, 2020 at 10:11am via Floral Arrangements