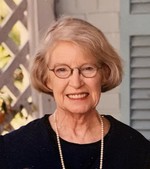 Beverly Wilson McMahon, 88, died Wednesday, October 28th, 2020 at 8:10 PM. Born in Mobile, Alabama, she was a native of Houma and resident of Metairie.

A Mass of Christian Burial will be held on Monday, November 2, 2020 at the Cathedral of Saint Francis de Sales at 11:00 AM.

Beverly grew up in Mobile, Alabama and graduated from Murphy High School. She then moved to Baton Rouge and graduated from LSU with her bachelor’s in Education and was a member of Phi Mu Sorority. After a brief stint as an airline stewardess, the family moved to Houma in 1962 where she dedicated her remaining years as a school teacher. She taught at Legion Park, Terrebonne High School, St. Bernadette, and St Francis de Sales, where she retired. She touched many lives and was passionate about Louisiana History, US History, and government. She became very popular with her students as director of various field trips.

Beverly loved her children and adored her grandchildren, and she had a loyal group of close friends. Her hobbies included history and reading.

The family asks that in lieu of flowers, donations can be made in her name and honor to St. Francis de Sales School.