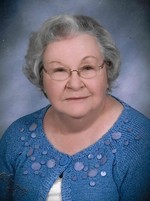 A visitation will be held on Wednesday, January 29, 2020 from 10:00 AM until service time at First United Methodist Church of Thibodaux. A Funeral Service will begin at 11:00 AM at the church. Private Burial to be held.

Anita was a loving wife to her husband Joseph for 64 years, whom she met in Hollywood, California while they both worked for Lockheed Aircraft during World War II.

She worked as a secretary for several businesses in Thibodaux and was a business owner herself. She was a phenomenal seamstress making many costumes for both Mardi Gras and dance recitals. In addition to her numerous endeavors, she was an exceptional mother, wife and homemaker.

She was devoted to her church and cherished participating in church activities.

The family sincerely thanks the staff of Lafourche Home for the Aged for their compassionate care and support.

In lieu of flowers memorial donations may be made to First United Methodist Church of Thibodaux.